Ten species of bats have been observed by researchers in Muir Woods National Monument. That is nearly two thirds of the bat species found in the central coast of California. Five of the bats are Federal Species of Concern. 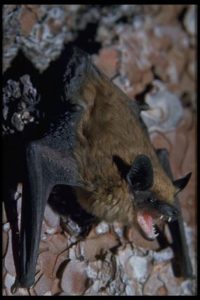 Bats find refuge in the cavities of the giant redwood trees within the monument. They use these cavities as day roost for sleeping, night roosts for resting in between foraging, and for maternity roosts. These tiny but long-lived mammals are probably some of the least understood animals around. Getting to know bats is like getting to know a whole new world. Often called “mice with wings,” bats are actually more closely related to primates than to rodents. Other than humans, bats are the longest lived mammals for their size in North America. Bats have the night-time shift, resting in the daytime and hunting over large tracts of land through the night. Most bats use echolocation and bounce sound waves off of insects and objects in order to locate and hunt their prey, keeping many pest insect populations under control. They are also important pollinators and seed dispersers. Bats live on all continents except Antarctica and unfortunately their populations are on the decline worldwide. These often maligned creatures are actually an integral part of any ecosystem, and perhaps a reason to explore the parks at sunset. Listen for the gentle flap of wings and look for that classic silhouette as the sun sinks.

Although developed areas can support more common bats that you may have heard of, such as the Mexican free-tailed bat and the big brown bat, the high diversity associated with Muir Woods is unique to protected and ecologically intact areas. 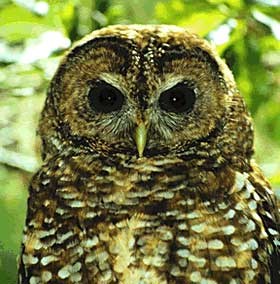 Over 50 species of birds have been identified in Muir Woods over a year’s time. Their abundance and periods of song vary with time of day, season, and weather conditions. The greatest variety of avian activity occurs during the spring mornings. A deep, wooded redwood canyon is a specialized habitat. Although this old growth forest supports spotted owls and pileated woodpeckers, the overall lack of food is the primary reason for the apparent scarcity of birds. There are few insects in a redwood forest as the tannin repels insects and the deep shade limits the number of flowers and fruits produced. The following quotation from the Superintendent’s annual report for 1923 indicates little change during the past 80 years in the bird life found in Muir Woods:

“Birds, as is generally the case in a redwood forest, are conspicuous by their absence – Steller’s jay being the only bird seen in any numbers.”

We thank the many birdwatchers who have contributed their observations to the Park and invite you to also do the same.

Visitors to Muir Woods often comment on the lack of wildlife. But if they were to get out a magnifying glass, they would see that life in the redwood forest is not only abundant, it is everywhere; it’s just smaller than they expected. From the dramatic and beautiful, such as butterflies and slugs, to the microscopic, such as springtails, the invertebrates of the Monument play a vital role in the health of Muir Woods. 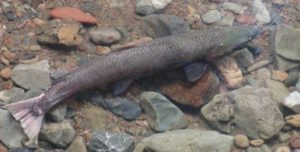 At Muir Woods, we have two different species of salmon; the Coho or Silver salmon and the Steelhead salmon (formerly steelhead trout). The adults may be seen in the winter as they return home to Redwood Creek to spawn and give life to the next generation. The adult Coho Salmon can typically be seen in the creek December – January. The Steelhead follows soon after and can be seen late January – early March. Although the Coho begin and end their lives in Redwood Creek, the Steelhead battle their way up the creek, spawn and race back out to sea in hopes to return home the following year to Redwood Creek.

On occasion biologists can be seen hard at work conducting fish surveys in Redwood Creek to monitor three crucial periods in the life cycle of coho salmon: junvenille, smolt, and adult. Information will be collected both on a population and individual level in all three monitoring periods.

Young salmon were safely fished out of Redwood Creek in the summer of 2014 and brought to Warm Springs Fish Hatchery in Lake Sonoma as a temporary measure to prevent extirpation of the species in Redwood Creek. These salmon will be brought back to Muir Woods when they are ready to spawn.

© 2022 Muir Woods. This website isn't affiliated with any government entity